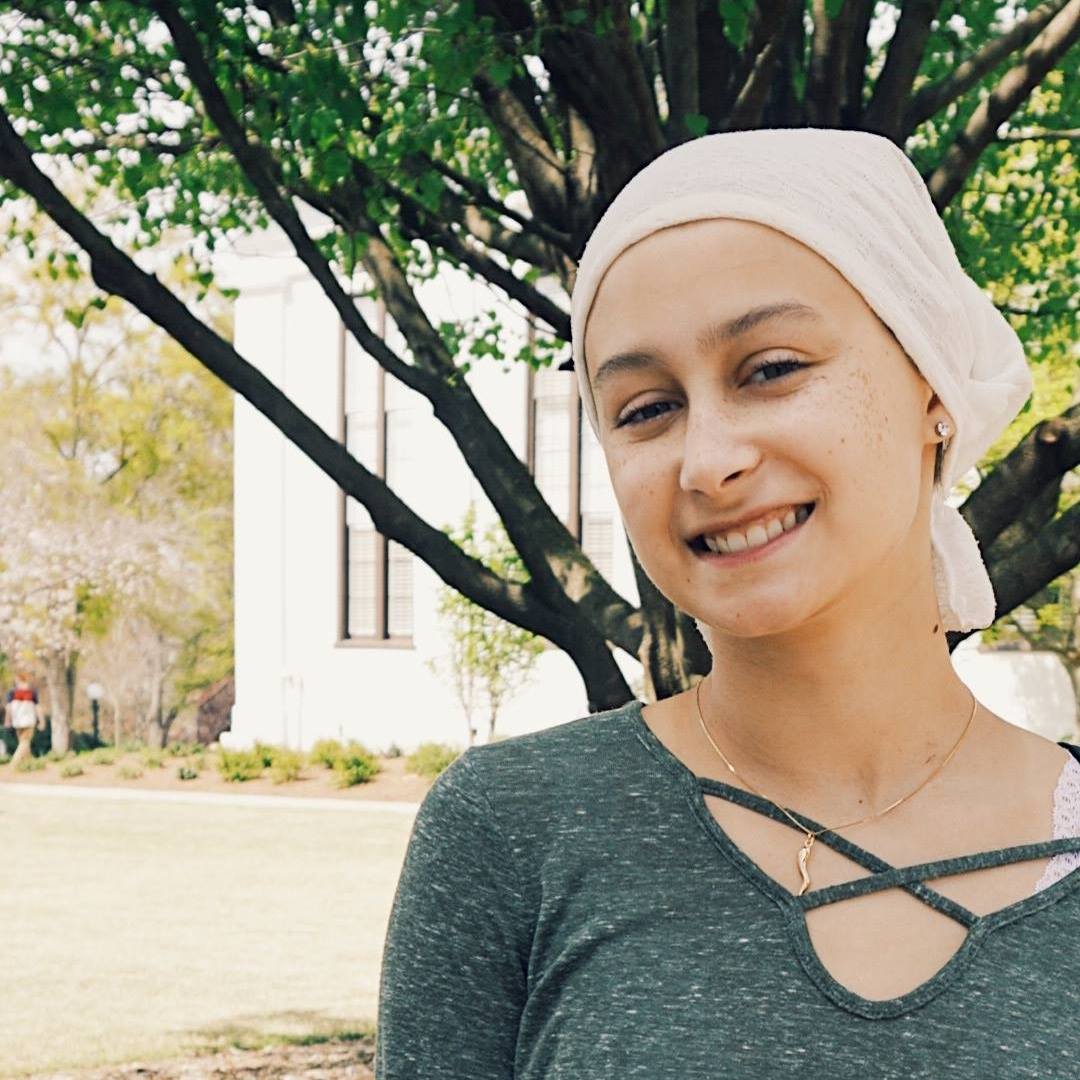 The summer before Natalie was a senior at Grayson High School, she was attending conditioning for her competition cheer team. Her coach reached out to us and said that Natalie was getting very fatigued during conditioning. We knew it was strenuous but decided to follow up on the coach’s recommendations and took her to the doctor.After an examination, we convinced the doctor to do a blood test. Her counts showed she was extremely anemic. Since Natalie had stated she had some abdominal pain, the doctor referred us to a gastroenterologist.A series of tests were done including a colonoscopy and an endoscopy. They discovered several small ulcers in her stomach and started treating her for those. After several weeks, her anemia had not changed, so more tests were done. A sample showed blood in her stool, so they decided to do an MRI to identify if there was something not seen in the endoscopy which only sees the upper GI and the colonoscopy which only sees the lower GI. No test could see in between these.The MRI result showed a mass or cyst in her intestines. They stated it was about 5 cm and wanted to do a biopsy. By this time, Natalie had already started her senior year and had still been doing the competitive cheer competitions.We met with the surgeon and he explained that they were going to do the biopsy and he said he might remove the cyst or mass if he was able to. After the procedure, he spoke to us and stated, the mass was larger than thought and he could not remove all of it, but he said it was wrapped around her intestines and he ended up removing a 30-inch portion of her small intestines. He said it was definitely a malignant tumor and he said there were many more tumors that would have to be removed. This was the first time it was confirmed she had cancer. We were devastated and our lives completely changed.The recovery was very difficult. Natalie missed a couple weeks of school and she had many AP classes. Her teachers, coach and teammates were terrific during this time.We met with the oncologists at Children’s Healthcare of Atlanta to determine what course of action to take. It took over 3 weeks to find out what specific cancer we were facing. Samples were confirmed at Washington University in St. Louis that this was Clear Cell Sarcoma of the gastro-intestinal tract. This is very rare form of cancer, that at the time there were only about 100 known cases globally. The doctors informed us that there was no cure and no real treatment plan.One bright thing during this time was that Natalie was accepted to the University of Georgia. We were super happy, but not sure it would actually happen. But she was very determined to fight this cancer.Another surgery was scheduled, and Natalie had the remaining tumors removed from the mesentery lining. Natalie healed and developed an infection and spent another week in the hospital – discharged Christmas Day.Additional scans were scheduled. These scans revealed the cancer had metastasized to her liver and lungs. Although there were no known treatments, her oncologists discussed trying Votrient- an oral chemotherapy treatment. We discussed and read about the side effects and Natalie decided she would like to start this. She started on the highest dose – 800 mg daily.The first couple months were tough. Natalie felt terrible but kept up her school work and continued the treatment. Natalie has always kept her hair long and she had dark brown hair. One side effect was her hair turned white – eyelashes, eyebrows and the hair on her head. Friends and family donated money to have her hair colored to help her feel better.Three months later she had scans and the tumors were shrinking. The next three months still showed improvement. After six months on this treatment, her kidneys started being affected and she had to adjust the dose down.Natalie started her freshman year at UGA. She wants to be a teacher for early childhood education. We enrolled her in the Disability Resource Center at UGA to help with when she needed to misses classes due to the many doctor appointments. They have been a tremendous help.After nearly a year on this medicine, the tumors stopped shrinking and some new growth started. It stopped working and was discontinued.Oncologists suggested another immune-therapy medicine Opdivo. Natalie started this during her second semester in college. This was not an oral medicine and she had to go for infusions every couple weeks. Side effects were worse, but she made it through her school year. Her scans at the end of this showed that Opdivo did not work at all and actually everything was worse. New tumors where found in and on her liver and her lungs.We were introduced to a Phase 2 clinical trial and met with this oncology team – this is a two-year trial. They determined she would be a good candidate and Natalie wanted to try it. The trial includes a combination of four drugs (all taken orally). This combination had more side effects. Within three weeks, Natalie started losing her hair and eventually lost most and decided to shave her head. She has been wearing head scarves since.Natalie is in the second year of this clinical trial and she just began her junior year at UGA. We don’t know what the future will be. She has so much she still wants to do in life. She is very determined to beat this cancer and live out her life to the fullest.Michael and Sandy Staffieri.*Update: Sadly Natalie lost her battle with CCS on March 1, 2019